We took our biggest draft of foals to Tattersalls last week and it was also our strongest. The good results were led by foals by the French-based father and son Wootton Bassett and Almanzor. Both weanlings were both bred by Overbury from mares bought by Richard Brown at Arqana last December. The Wootton Bassett colt out of Jeu De Plume sold for 130,000gns to Peter and Ross Doyle and the filly out of Plume Rose from the first crop of former champion three-year-old Almanzor was bought by Blandford Bloodstock on behald of pinhookers Corduff Stud for 125,000gns. 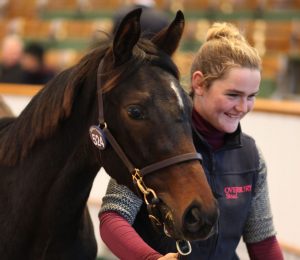 The Almanzor filly out of Plume Rose after selling for 125,000gns

A number of stallions with first foals at the sales proved popular and we were delighted to sell a filly by our own Ardad, bred by Jocelyn Targett, for 52,000gns to Stuart Boman. The Ardad foals at Tattersalls also proved popular with pinhookers, with Michael Fitzpatrick, Tally-Ho Stud and Aughamore Stud among those buyers to have selected one of his weanlings.

By the end of Saturday, we had sold 15 foals for a total of 592,500gns at an average price of 39,500gns and there was plenty more cheer to come on the racecourse that afternoon, thanks to one of the graduates of our 2014 Tattersalls foal draft.

It has already been a good National Hunt season thanks to Thyme Hill, a five-year-old son of Kayf Tara bred at Overbury and now the winner of three of his five races, including two Grade 2 hurdles. On Saturday, Cornerstone Lad, bred by Overbury Stallions in partnership with Cranford Bloodstock and by our late stallion Delegator, made all to win the G1 Fighting Fifth Hurdle at Newcastle, narrowly holding off the dual Champion Hurdle winner Buveur d’Air.

Now five, Cornerstone Lad has been a credit to his connections, winning twice on the Flat and six times over hurdles, with his last three consecutive victories coming on the level at Catterick and over hurdles at Wetherby and Newcastle.

Congratulations to Cornerstone Lad’s trainer Micky Hammond and owner Mrs Lofthouse, and sincere thanks to all those buyers who supported our foal draft at Tattersalls.