A Derby winner and a few Champion sires…

The Holland Martin family, which owns the Overbury Estate, established Overbury Stud shortly before the Second World War. Benefitting from free-draining sandy soil and a mild climate which is so important to this fruit-growing area of the Vale of Evesham, Overbury Stud quickly encountered success: the Coventry Stakes of 1952 was won by the Overbury-bred Whistler, who went on to be a Champion sire of two-year-olds.

Globetrotting German-trained multiple G1 winner Caitano and the Nunthorpe and Prix de l’Abbaye winner Tower Walk (who also ran second in the 2,000 Guineas) are other top-class racehorses bred at Overbury Stud, which also became famous for producing big-priced commercial yearlings at the Houghton Sales of the 1970s and ’80s.

The stud’s greatest ever son, however, was sold for the relatively modest sum of 27,000gns: Grundy, Horse of the Year in 1975 and winner of the Derby by three lengths, the Dewhurst (by six lengths), as well as that famous King George VI and Queen Elizabeth Stakes, when he defeated Bustino after an unforgettable duel and in course record time.

At the turn of the new millennium, the Holland Martin family leased Overbury Stud to Simon Sweeting, who founded Overbury Stallions Ltd – under his management, Overbury Stud has grown a reputation for standing stallions.

The three-time Champion stayer Kayf Tara, who retired to Overbury Stud in 2001, was joined by the leading sprinter Bertolini in 2002.

Both Darley-owned stallions were keenly priced, drawing great support: Bertolini was Europe’s leading first-season sire of 2005 (beating Galileo), when he numbered the G1 Cheveley Park heroine Donna Blini (now dam of Japanese Champion Gentildonna) among his winners; while Kayf Tara has been the leading British National Hunt stallion no fewer than 11 times before his retirement in 2020.

His first crop was led by the G1 winner Planet Of Sound, and his best horse is perhaps the Horse of the Year and King George winner, Thistlecrack. Kayf Tara has been just as notable as a sales stallion.

Overbury Stallions is committed to standing exciting, well-bred stallions who represent value for breeders keen to use young stallions who could be the next big thing. As many successful breeders know, this kind of stallion offers the possibility of huge rewards for a modest outlay – stallions like Cityscape, who sired no fewer than three first-crop Group winners.

Besides its stallion business, Overbury Stud also offers top quality boarding and sales services and is developing a broodmare band with the aim of repeating this famous nursery’s earlier successes. ‘We intend to strengthen our position at the leading foal and yearling sales,’ says Simon, ‘And we are already achieving good prices for our youngstock.’ 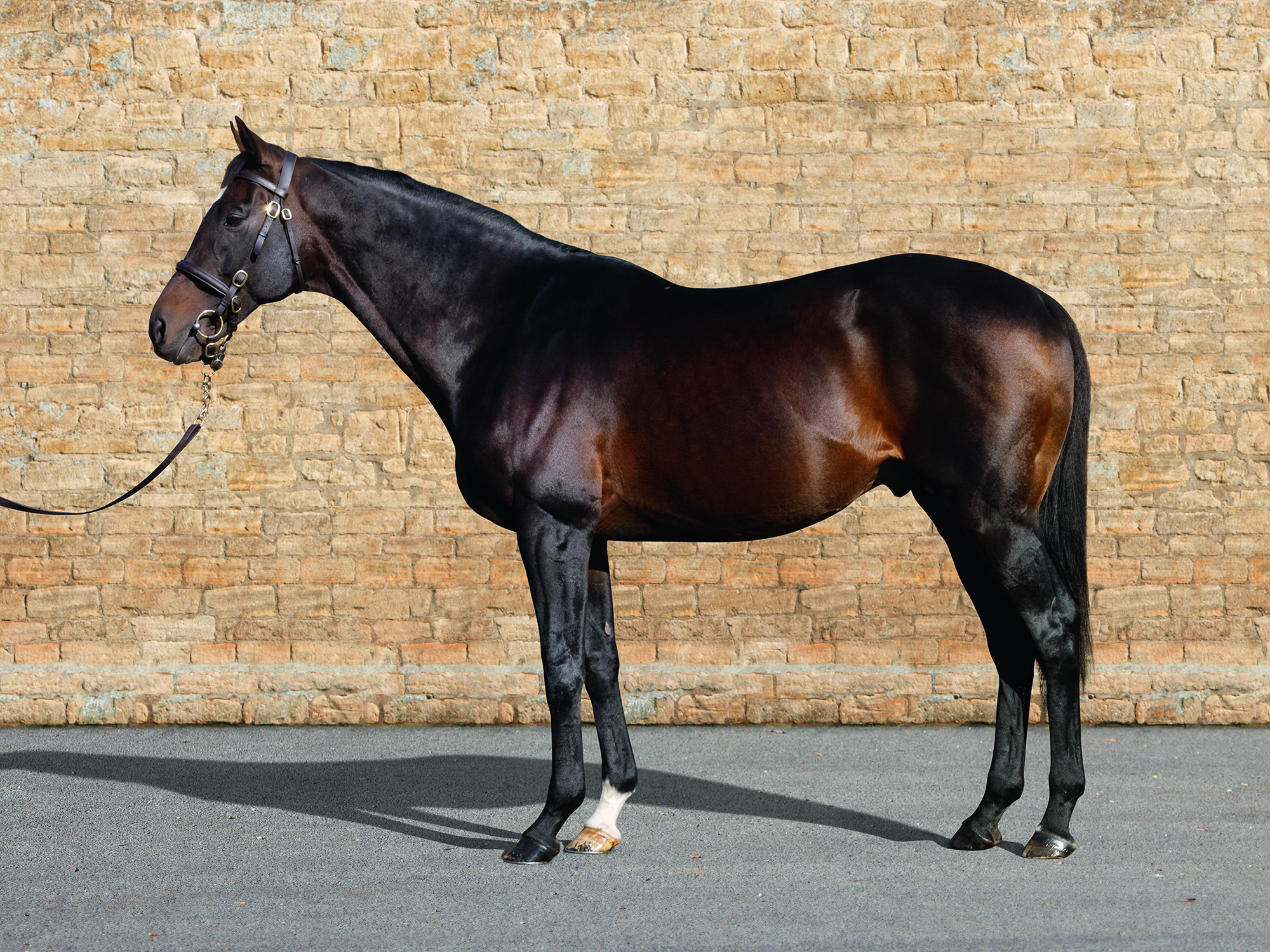 A Champion stayer no fewer than three times, when Kayf Tara arrived at Overbury Stud in the autumn of 2000 he was to become the best racehorse ever to go to stud as a jumps stallion in the UK. Over the next two decades, Kayf Tara became Champion Jumps stallion in the UK a record 11 times before retiring from stud duties in 2020. He has sired the best horses many British National Hunt breeders have ever produced.

Bred by Egon Weinfeld’s hugely successful Meon Valley Stud and offered at the Houghton Sale in 1995, the Sadler’s Wells colt was personally selected by Sheikh Mohammed bin Rashid al Maktoum and knocked down to him for 210,000gns. Out of the High Top mare Colorspin – the Irish Oaks winner out of one of Weinfeld’s foundation mares Reprocolor – Kayf Tara is a brother to Sheikh Mohammed’s Eclipse and King George winner Opera House, who won as a juvenile but didn’t start winning at Group level until he was four.

Kayf Tara was similarly late maturing. Trained initially by Michael Stoute and running in the yellow colours of Sheikh Mohammed’s younger brother Ahmed, the leggy bay won at Ascot over 12f in July, having been runner up first time out. Ten months later, in May at four, he reappeared to win a 12f conditions race in great style – Tamure, who had been second in Lammtarra’s Derby, was beaten some nine lengths.

Transferred to the Godolphin stable under the tutelage of Saeed bin Suroor, Kayf Tara was immediately stepped up in both class and trip, in the two-mile G2 Henry II Stakes just three weeks later. He went down fighting. His conqueror? That all-time favourite, Persian Punch. 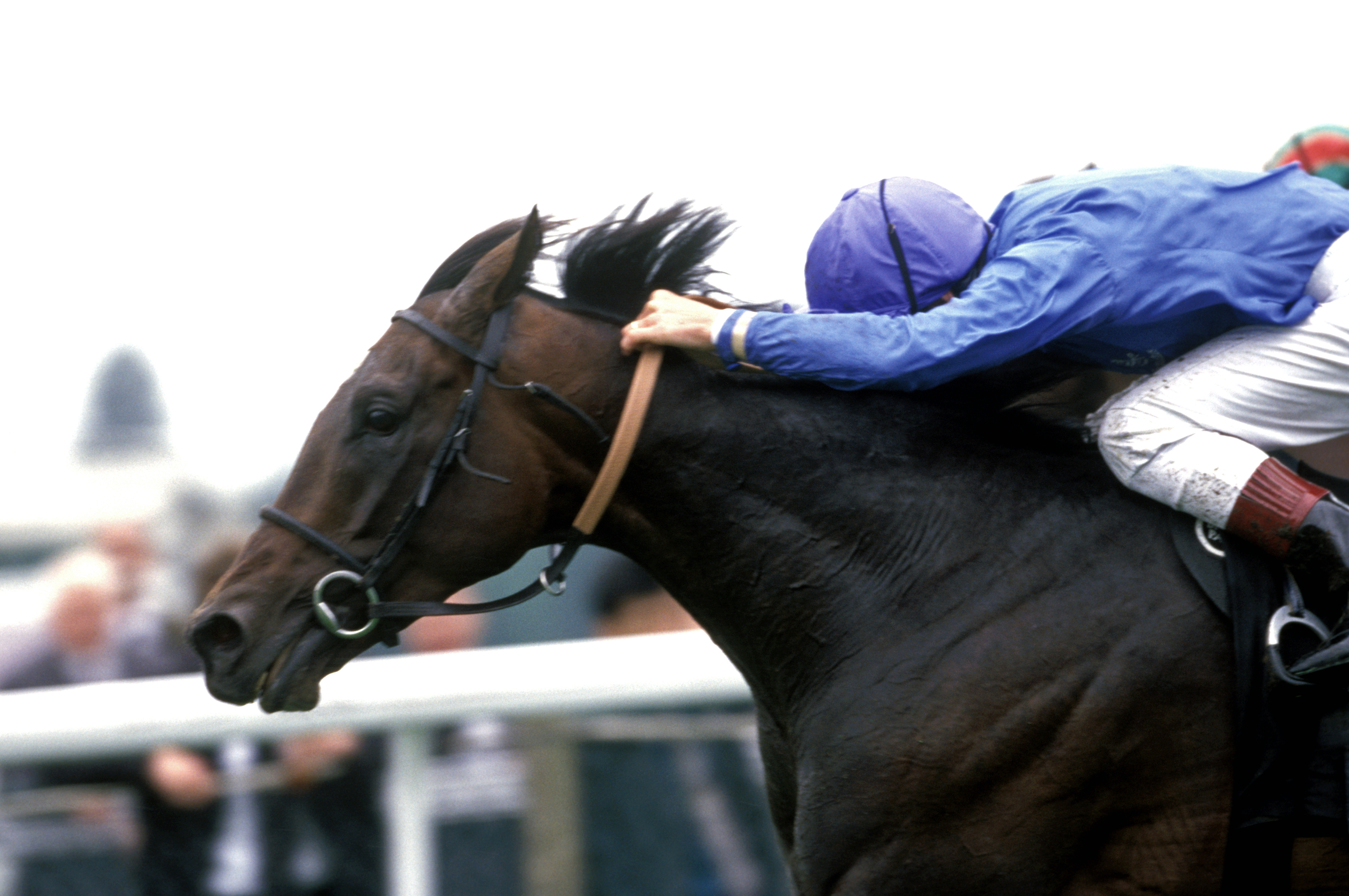 Next – the G1 Gold Cup, and in a golden era of great stayers, Kayf Tara battled to the first of his four G1s, avenging his defeat by Persian Punch, beating Double Trigger into second, and with the previous year’s winner Celeric further back. A victory in the G1 Irish St Leger (again beating a Derby runner-up in Silver Patriarch) sealed his status as the season’s Champion Stayer.

It was a title he was to be awarded in both the next two seasons – he won the Irish St Leger and Goodwood Cup as a five-year-old and he reclaimed the Gold Cup as a six-year-old. He was in Australia training for a tilt at the Melbourne Cup when injury ended his career – in four seasons on the track, Kayf Tara had raced over 227 furlongs, won 10 of his 15 races and had never been beaten in a photo finish. He was rated 130 by Timeform.

Kayf Tara started out at Overbury at a stud fee of £3,000 and made an instant impact: a colt foal from that debut crop sold for 70,000gns, his first ever winner was the three-year-old filly Ruby Wine in a Listed Oaks trial, while G1 Punchestown Gold Cup hero Planet Of Sound was also conceived in his first season at stud. 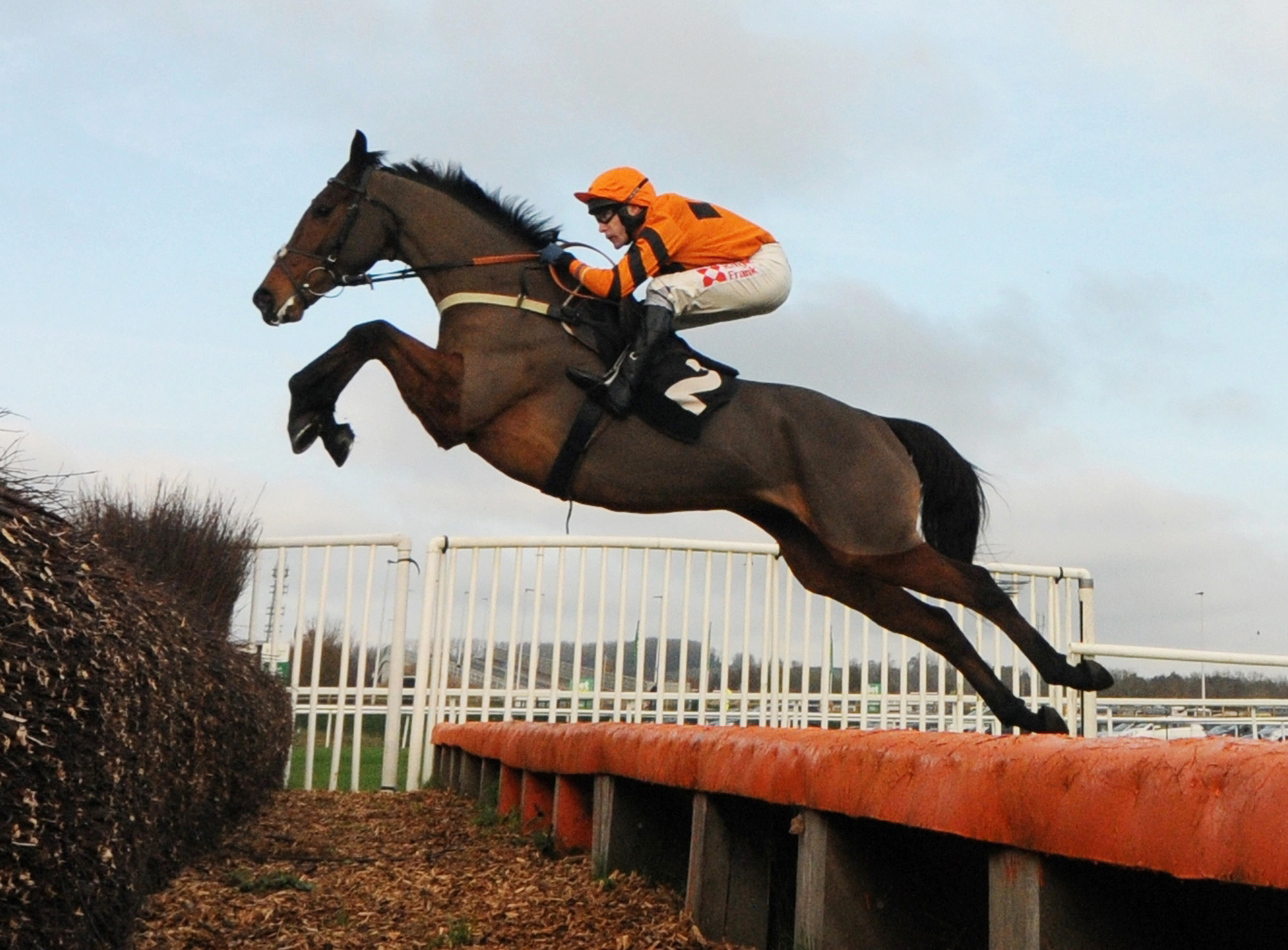 Among the many famous winners he’s sired, some of the most impressive and popular are the front-running Hennessy winner Carruthers, bred by Lord Oaksey, the stunning King George winner and Horse of the Year Thistlecrack, and the free-running Champion Chaser Special Tiara. Part of Kayf Tara’s enduring popularity with breeders has been his ability to sire imposing, well-made, attractive youngstock: stores by him have made up to 250,000gns with a career average for stores of 36,000gns – astonishing, especially considering stores from his last three crops, conceived for a fee of £10,000, have yet to be offered at auction.

For 20 years, Kayf Tara has been a great ally to so many breeders, and the Overbury Sallions team are deeply indebted to Sheikh Mohammed for entrusting his greatest stayer to the stud. Fit and hearty at the age of 26 on his retirement from stud duties in 2020, Kayf Tara promises to make a considerable impact on British and Irish jumps racing for many years to come. 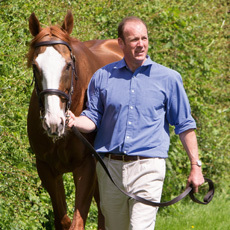 Simon was brought up at Conduit Stud where his parents stood firstly HIS and then National Hunt stallions including Sunyboy, Kinglet, Relkino and Petoski. After school he began his equine education at Colin Hayes’s Lindsay Park Stud, followed by a yearling season at Timmy Hyde’s Camas Park Stud and a breeding season at Coolmore. This was followed by three years at Cirencester where he gained a degree (BSc Hons.) in Rural Estate Management. In the early 1990s he spent four seasons at Warren Place as Assistant to Henry Cecil – years that ran from Commander In Chief’s Derby victory up to Bosra Sham’s 1,000 Guineas win. This was followed by a year in New York overseeing Bobby Frankel’s string whilst Bobby remained in California, and a further three years with Luca Cumani which included High Rise’s Derby victory. In 2000, he took up the lease on Overbury Stud which coincided with the opportunity to stand Kayf Tara and the launch of Overbury Stallions Ltd. 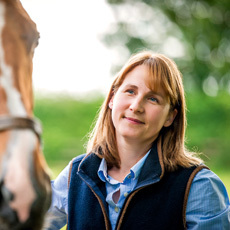 Jo gained a diploma in the Management of Thoroughbred Horses at Witney College, and then, having completed the National Stud course, won the National Stud Scholarship which paid for her to work a season in Australia. She worked at Cheveley Park Stud and in the Darley Racing Office before joining Overbury in 2001. Jo was one of the three finalists in the Stud Staff category of the 2017 Godolphin Stud & Stable Staff Awards. 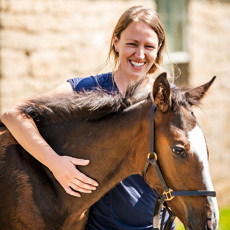 Catherine has a degree (BSc Hons) in Equine Science from Hartpury College and was one of the three finalists in the High Achiever category of the 2010 Godolphin Stud & Stable Staff Awards. She has subsequently worked at Usk Valley Stud and New Mill Stud before coming to Overbury. Catherine was Stud Groom from 2008 until 2016 and then following her maternity leave has returned to work in the office as Stud Secretary. 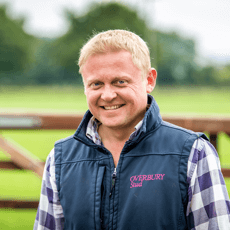 Matt started as Stud Groom in 2018 and came to Overbury with a wealth of experience. He has managed Brightwalton Stud; was Broodmare manager and separately, stallion man at Highclere Stud. Matt also spent time as Clerk of The Course at Hereford Racecourse along with gaining early experience at Tweenhills, Furnace Mill and Hesmonds Stud.

Kirsti came to work at Overbury Stud as Assistant Stud Groom at the end of 2018. Kirsti came from being Foal / Broodmare manager at Highclere Stud but prior to that had run her own Breaking / Pre Training yard, had been Assistant Trainer at Pin Oak Stud as well as previous experience working at Kildangan Stud, Herringswell Manor and a work rider for Champion trainer Andre Fabre. 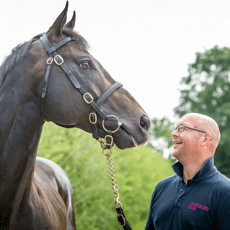 Dan has lived at Overbury all his life and his family has strong connections with the Estate. He started work on the stud in 2001, his first job with horses, and has been responsible for the stallions for ten seasons. He was a county standard rugby player before injury forced his early retirement. 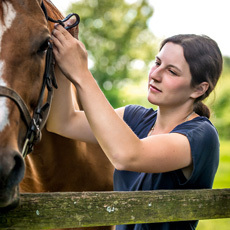 Joined as a full-time member of staff in 2013 having worked five stud seasons at Overbury. Leanne takes responsibility for the barren and maiden mares during the breeding season. 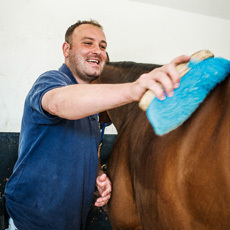 Lukasz first worked at Overbury Stud as a seasonal stud hand in 2007 and joined us as a permanent member of staff in 2010. He has previously driven tanks in the Polish army and worked in the building industry. Lukasz is in charge of our tractor work and paddock maintenance and also assists Dan with looking after the stallions.

Greg was born and brought up in Poland, where he was a member of the Polish Young Riders Showjumping team. Greg came to the United Kingdom in 1988 and graduated from Glasgow in 1992. Initially he worked in a mixed practice near Milton Keynes before moving to an equine clinic at Newark, near Nottingham. In 1995 Greg arrived at Bourton Vale and joined the partnership in 1999. Greg took over from our recently retired stud vet Charlie McCartan in 2018 and carries out most of the stud work at Overbury Stud.

Jimmy started working at Overbury in June 2019 after completing 22 years in the King’s Troop Royal Horse Artillery. He helps in many aspects of stud life from the covering shed during the season, to working at Tattersalls with our foals and mares. In his spare time, he is a keen sportsman.