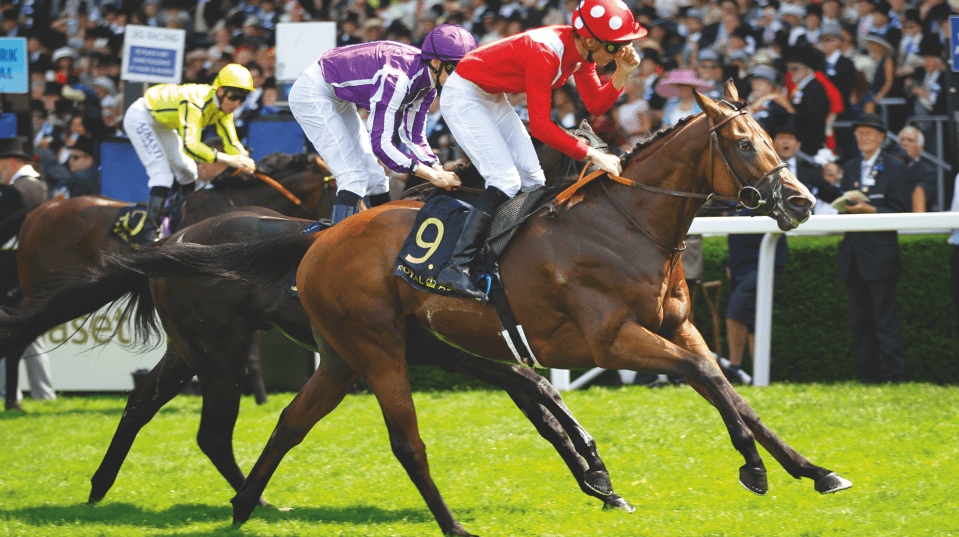 Andre Fabre acclaims ‘a top-class colt and one of the quickest I’ve trained’.

Le Brivido, the son of Siyouni who won the G3 Jersey Stakes in great style for Andre Fabre in 2017, will stand at Overbury Stud in Gloucestershire in 2020. In a deal brokered by Blandford Bloodstock, Coolmore – part-owners during Le Brivido’s racing career – are retaining their interest. Le Brivido retires assessed as the best horse ever sired by France’s current leading stallion, rated superior to French Derby winner and Arc second-favourite Sottsass on official figures, and also above six-time G1 heroine Laurens and Prix de Moulin winner Ervedya. He is also rated the best Jersey Stakes winner on record. He will stand at a fee of £7,000 Oct 1, SLF and a limited number of breeding rights will be available.

Bought by Ted Voute at Arqana as a juvenile for €105,000 and racing in the red silks of HRH Prince Faisal bin Khaled Al Saud, Le Brivido made his debut in a newcomers event over 1300m at Chantilly. He won with his ears pricked from future Listed winner Uni, with what was to become a characteristic surge of speed. At the same course over 1200m the following spring, Le Brivido did it again, picking up brilliantly to reel in future G3 sprint winner Aladdine.

Within a month, master trainer Fabre threw Le Brivido straight into the deep end: his first step into Stakes company and first start at a mile came in the G1 Poule d’Essai des Poulains. Drawn on the wide outside and still held up in last place with under two furlongs to run, Le Brivido circled the field, zipping past G1-winning juveniles Rivet and National Defense and G2 sprinter Inns Of Court before tackling Brametot, who was to win the French Derby from Waldgeist in his next start. They duelled all the way to the line, Le Brivido hitting the front before losing out by a short-head in the dying strides. His run was officially rated good enough to have won eight of the last ten runnings, above the 2019 winner Persian King.

Backed into 2-1 favouritism for the G3 Jersey Stakes, Le Brivido was at his brilliant best at Royal Ascot in his next start, storming five lengths clear of the far side group and then digging deep to beat the nearside runners. He won the race in a faster time than Ribchester the year before and Expert Eye the following year, and the BHA rated his performance not just better than theirs, but as the best Jersey Stakes winner on record. The Racing Post described Le Brivido as a ‘top-class colt’, an opinion with which Andre Fabre concurred: ‘When he got beaten in the French Guineas it was a matter of greenness – he hit the front a bit soon. When Le Brivido won at Royal Ascot, he had to quicken twice – once to lead the horses on the far side and again to beat the standside runners. That was a special performance from a top-class colt.’

The Sussex Stakes, the Prix Jacques le Marois and the Breeders’ Cup Mile were all mooted as targets, but niggling injuries counted him out of all of them. At the end of the season John Magnier and the Coolmore partners bought into Le Brivido with his record standing at just one defeat at two and three.

Transferred to Aidan O’Brien for the latest season, Le Brivido showed glimmers of his brilliant best back at Royal Ascot when running well in both the one-mile Queen Anne and six-furlong Diamond Jubilee in the same week. He has finished his career having defeated 13 G1 winners, among them winners of the Prix du Moulin, the Diamond Jubilee, the Queen Anne, three major one-mile Classics and two runnings of the St James’s Palace Stakes.

Andre Fabre added, ‘Le Brivido was one of the quickest and most exciting horses I’ve ever trained. He could accelerate even off a fast pace. A colt with the most beautiful action and immense natural talent.’

Le Brivido’s opening fee is on a par with the starting fees of both his sire, Siyouni (€7,000) and grandsire Pivotal (£6,000). On official ratings he is assessed as the best of the three on the racecourse with an official rating of 121, a pound above Pivotal and three better than Siyouni.

Simon Sweeting, Manager of Overbury Stud said, ‘We’ve had our eye on Le Brivido for a couple of years – he’s a really good-looking son of one of Europe’s up-and-coming star stallions – and we are all completely thrilled to be standing him at Overbury Stud. It’s great news that Coolmore is staying in the horse, and we will also be offering a limited number of Breeding Rights. His sire’s fee jumped up to €100,000, and his grandsire went from £6,000 to a high of £85,000 – there isn’t a more upwardly mobile sire line and Le Brivido could make a lot of breeders very happy if he follows their lead.’

Volta’s breeder gets Le Brivido off to a positive start

The first mare covered by Overbury Stud’s new stallion Le Brivido has been tested in foal. She is the young George Vancouver mare Espionne, who won over a mile at Chantilly as a three-year-old, and is…
{ more }